Vietnam’s seafood exports to the UK are expected to pick up in the remaining months of this year with the full-year revenues projected to increase by 5 per cent over last year, according to the Vietnam Association of Seafood Exporters and Producers (VASEP).

Le Hang, VASEP’s chief communications officer, said exports to the European country decreased by nearly 5 per cent in the first seven months of the year mainly due to a slump in shrimp export.

Shrimp is among Vietnam’s key seafood exports to the UK.

With inflation in the UK hitting a 40-year high, and among the highest rate in Europe, consumers have tended to reduce consumption of high-priced food items, Hang said.

As a result, exports of items like shrimp, tuna and some marine fish species to the UK decreased sharply, she said.

Pangasius exports grew at 16 per cent thanks to its affordable prices, she said.

With a shortage of whitefish due to the western ban on seafood imports from Russia, pangasius has become a replacement in the UK, especially for the popular fish and chips, she pointed out.

“In August pangasius exports to the UK increased by more than three times year-on-year.

“Seafood exports to the UK in the last months of the year are showing positive signs compared to the earlier months, especially pangasius exports.

“With the favourable growth momentum, it is forecast that pangasius exports to the UK will reach US$67 million in 2022, up 30 per cent from 2021.

“Shrimp exports are also showing signs of recovery after a slight decrease earlier. It is expected that full-year exports will top $250 million, up 7 per cent.

“These two key products along with other seafood products will bring in total export revenues of $335 million in 2022, an increase of 5 per cent.”

The UK is among the top 10 seafood export markets for Vietnam, accounting for 3 per cent of total exports in the first seven months.

The UK-Vietnam Free Trade Agreement of May 2021 is an important continuation of trade facilitation between the two countries after the former exited the EU.

Tariffs for bilateral trade are replicated from the EU -Vietnam Free Trade Agreement.

“This means that tariff duties on frozen shrimp products exported to the UK have been reduced to zero per cent since the agreement came into force, while pangasius has a tariff elimination road map of three years. Thus, by 2022, these key products will almost enjoy zero tariffs in the UK.

“Squid, octopus and shelled mollusks are also subject to zero per cent.

“This is an advantage for Vietnamese enterprises compared to competitors from countries that have not had an FTA with the UK such as India, Ecuador and Bangladesh.

“That is why Vietnamese shrimp maintains its No. 1 position in the UK market.”

Tony Thuan, international sales executive at the Cuu Long Fish Import-Export Corporation, one of the leading companies in producing aquatic feed and processing and exporting frozen pangasius, said the UK is the second largest importer of pangasius in the old EU after Germany.

The market also has huge demand for whitefishes, which are mainly imported from Russia and other countries.

In the European market, Vietnamese pangasius has to compete against whitefishes such as pollock and haddock.

The sanctions on Russian whitefish have resulted in a shortage in the European market, and whitefish importers have to find substitutes.

“Vietnamese pangasius is a good replacement for whitefish,” Thuan said.

“The UKVTA has benefited seafood firms exporting to the UK,” he said.

His company earned nearly $30 million from pangasius exports in the first seven months of the year, the same as the full-year figure for 2021, he said.

Exports to the UK accounted for 10 per cent, and the company has plans in place to increase shipments to the market, he added.

More needs to be done

Speaking at a recent conference in HCM City, Oliver Todd, the British consul general in HCM City and director of UK Trade and Investment in Vietnam, said Vietnam could replace countries like India and Indonesia as a major supplier of agricultural and aquaculture products to Britain.

But Vietnamese exporters need to be well prepared if they want to increase exports to a choosy market like the UK, and it is important for them to learn about demand and quality requirements, he said.

“Exporting to the UK demands high product quality, and UK legislation is increasingly moving towards core sustainability and assessing this ‘through the supply chain’ in sourcing.”

He encouraged Vietnamese companies to increasingly consider their production methods to enhance quality.

Nguyen Manh Dat, deputy director of the Ministry of Industry and Trade’s Institute of Food Industry, said Vietnamese exporters should do thorough market research to ensure their products are of high quality and competitive.

They must also ensure transparency for their products by developing websites and providing information about products, production lines, output, and trading partners, he said.

Bi Thi Thanh An, deputy director of the Vietnam Trade Promotion Agency, said to support enterprises’ exports to the UK, her agency would continue to help them promote their brands through national trade promotion programmes and seek out and connect with partners. 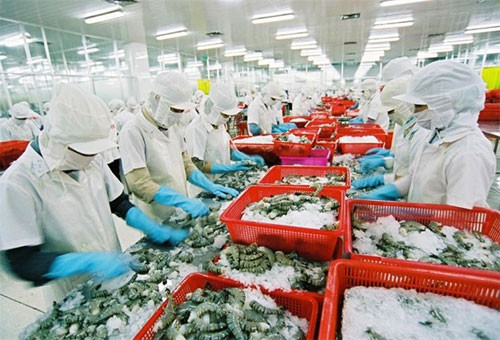 Vietnam’s seafood export turnover is expected to reach 8.3 billion USD this year, posting an 18 percent increase over 2016, according to the Vietnam Association of Seafood Exporters and Producers (VASEP).
Read more