BTO - On the morning of July 7th, the delegation of the Consulate General of Canada in Ho Chi Minh City led by Ms. Ambreen Khan - Deputy Consular of the Consulate General of Canada visited and worked with the representative leaders of Binh Thuan province. Mr. Nguyen Duc Hai Tung - Deputy Chief of Office of the Provincial People's Committee and representatives of leaders of the Department of Justice, Department of Health, Investigation Police Agency, Immigration Department of the Provincial Polic

The meeting aimed to exchange some contents related to the protection of Canadian citizens in the locality, thereby establishing and maintaining a close relationship between the Consulate General of Canada in Ho Chi Minh City with relevant agencies of Binh Thuan province to better support Canadian citizens when facing difficulties.

At the meeting, the representative of the Immigration Department - Provincial Police provided some information about the situation of Canadian citizens in the province. From January 1, 2022, up to now, there have been 410 turns of Canadian citizens coming to the locality to stay; Currently, the number of temporarily residing Canadian citizens is 24 people (including 01 working, 01 labor, 02 investment, 18 visiting relatives and 02 tourism).

In addition, the attendees also provided the guest delegation with some information on how to handle situations in case of disaster, storm, or flood. Notably, they are provided with a hotline phone number to contact when a Canadian citizen has an accident or problem; procedures for applying for birth, death, and marriage certificates; the support for granting temporary residence cards, temporary residence extensions, tourist visa extensions; order and procedures when receiving patients... for Canadian citizens.

Speaking at the meeting, Mr. Nguyen Duc Hai Tung - Deputy Chief of Office of the Provincial People's Committee informed and explained more about some interesting cases, saying that he expected that Ms. Ambreen Khan would pay more attention to calling Canadian businesses to learn and invest in the province, especially in the fields of health and education to promote the bilateral relationship.

On behalf of the Consulate General of Canada, Ms. Ambreen Khan - Deputy Consul thanked the delegation for the warm and thoughtful welcome of the host. She highly appreciated the coordination of local authorities in handling cases related to Canadian citizens over the past time. At the same time, she expected to continue to establish and maintain a close relationship between the Consulate General of Canada in Ho Chi Minh City and relevant agencies of Binh Thuan province. 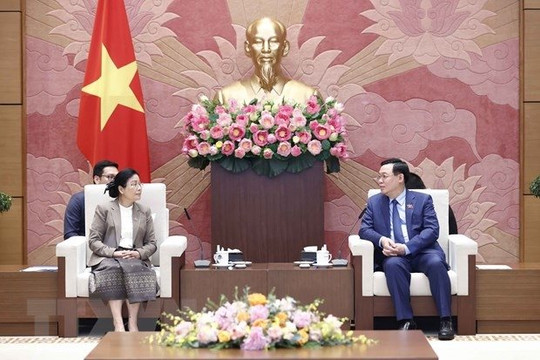