BTO - From being a "hot spot" for the number of new Covid-19 cases in the province, Phan Thiet City has officially become a safe green zone since December 24 thanks to the efforts and resolve of the entire political system, functional authorities, frontline forces, and public support. To achieve the above result, the city has taken firm steps, gradually "greening the red zone" and returning people's lives to a "new normal" state.

Mr. Phan Nguyen Hoang Tan - Chairman of Phan Thiet City People's Committee recalled the situation of the Covid-19 epidemic across the country, especially in neighboring provinces and cities was very complicated in the early July. The city was in a high-risk of infection from the outside. At the time, the municipal government continuously met to discuss measures and ways to prevent the risk of disease arising.

Until July 19th, the outbreak erupted in the city again. In just two months, the city has seen an increase of 771 cases and 21 deaths. The number of Covid-19 deaths are mainly people with severe underlying diseases and have not been vaccinated or only received one dose of the vaccine. At this time, vaccination against Covid-19 has not yet been widely implemented in the public. In the face of this scenario, the municipal authorities have taken immediate steps to localize a vast region and trace down the cases that come up. As a result, the epidemic in the area was well controlled by September 8.

However, by the beginning of October, Phan Thiet continued to enter the arduous "war" with the re-emergence of the 4th waves of Covid-19 epidemic. The number of community cases was higher at this time than it had been during the preceding epidemic, but the death rate was lower. From October 1 to November 30, Phan Thiet has more than 5,800 Covid-19 infections, 16 deaths. From October 18, the Provincial People's Committee issued Decision 2780 temporarily regulating administrative measures "Safely adapting, flexibly, effectively controlling the Covid-19 epidemic" at each level in the province.

Phan Thiet has strictly complied and issued documents for timely implementation. During the implementation process, the whole political system from the city to the wards and communes has mobilized all resources and human resources to focus on solving difficulties, striving for the highest in epidemic prevention and control. Throughout the implementation process, the entire political system has so far achieved the greatest levels of epidemic prevention and control. From drastic measures, until December 24, the province has classified Phan Thiet as level 1 (green zone) based on the assessment of the epidemic level in accordance with Resolution 128 of the Government and Decision No. 4800 of the Ministry of Health.

Mr. Phan Nguyen Hoang Tan - Chairman of Phan Thiet City People's Committee shared “ In the roughly three months since the city's fourth epidemic (in 2021) erupted again, in addition to spending all of our efforts on avoiding and combating the epidemic, the city leadership team defined "overtime" as working outside of normal business hours. Phan Thiet's officials are likewise determined to working with people from all walks of life to turn the city into a "green zone" on the province's Covid-19 map. Following the efforts of the people and the entire city's political system, the province determined on December 24 that Phan Thiet's epidemic level was level 1 (green zone), with 6 yellow zone wards and 12 green zone wards and communes. This has been a long journey filled with sweat, effort, tenacity, and determination on the part of the Party Committee, the municipal, and citizens of all social classes in the city”.

Making efforts to expand and safeguard the green zone

It is impossible to hide all the joy at the achievements achieved in the prevention and control of the Covid-19 epidemic. Nevertheless, Mr. Phan Nguyen Hoang Tan said that the city is resolved not to be subjective in order to maintain the Party Committee's, government's, and people's achievements. As a result, the City People's Committee has asked people to continue strictly implementing the 5K messages, not to be subjective, and to be negligent when vaccinated, in order to continue to expand and protect the green area, bring Phan Thiet back to a completely "green" state. At the same time, he focuses on restoring the economy in a safe and new normal state. Mr. Tan added "every citizen has obligation, duty, and right to defend their own, their families’, and the community’s health”. In addition to campaigning and propagating, the City People's Committee has directed the City Police Division to continue patrolling and strictly handling violations of the law on the prevention and control of the Covid-19 epidemic, causing insecurity and order in the locality. Besides that, it should strengthen supervision and management of cases of entry from abroad. Especially cases going to or from countries and regions where the novel SARS-CoV-2 virus strain Omicron has been detected and propagated.

Simultaneously, the City People's Committee directed the City Health Center to urgently evaluate the results of the pilot project to manage, support and care for people infected with Covid-19 at home. After that, they can extract lessons from those results to speed up the implementation on a large scale, reduce overcrowding pressure and the risk of severe disease at the treatment facilities. As soon as the Covid-19 vaccines are available, the campaign of vaccination against Covid-19 for people aged 12 and up (priority is given to people aged 50 and up, as well as people with underlying medical issues) will keen on. It is necessary to ensure safety and efficiency, review and expeditiously complete the basic full-dose vaccination for cases aged 18 years and up, and deploy additional and booster shots for all cases with enough time right in January 2022.

Strengthening inspection and strongly punishing violations of regulations on prevention and control of the Covid-19 epidemic are required for the People's Committees of wards and communes. In particular, it focuses on strongly punishing activities such as failing to keep a safe distance, arranging the number of people to gather in excess of regulations, operating without an epidemic prevention plan approved by competent authorities, especially for high-risk food service enterprises and service establishments. At the same time, people are encouraged to keep doing 5K messages unless they are harshly punished in cases of non-compliance with epidemic prevention and control regulations, particularly 5K, etc. 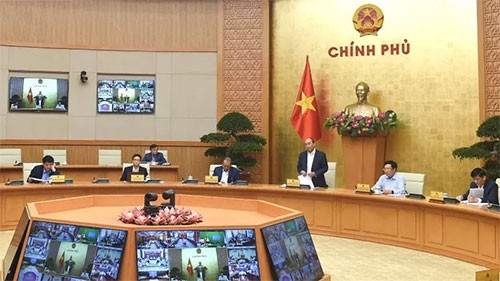 Vietnam must keep on pursuing the twin goals of effectively combating COVID-19 and boosting economic growth in the “new normal”, said Prime Minister Nguyen Xuan Phuc in a meeting on March 17 morning.